Articles and information about why play is crucial to children’s development, and the state of play in childhood now. Also, beyond the obvious joy of play, what are a few of the mental advantages of more specific kinds of play?

Below are  links to various newspaper, journal, and organization articles.  After that table, there are a series of images that speak to some element of play, even lightheartedly. 🙂

At Camp Augusta, children have the opportunity to create their own play together in Cabin Activities and Rest Hour, and with Playstation within a presented general frame.  During Evening Programs, campers decide how they want to engage in a created world, of which they are central characters to the world’s development and outcome.

The below “stickers” are from MAKE magazine, offering a tongue-in-cheek look at the state of play in America. 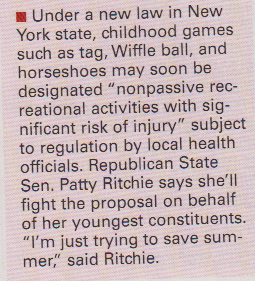 All we really need are smart, dedicated people, charged with pragmatism and play. And they will find a way to make things happen.

Professor McCracken, Harvard
Quoted in:  “Build This:  Your Culturematic Laboratory.”

At a time when the US unemployment rate topped 10 percent, the rate of unemployment for the Creative Class did not hit even 5 percent. By late 2011, the social media site LinkedIn reported that the word most used by its members to describe themselves was—you guessed it—“creative.” As TechCrunch put it: “In a time of high unemployment, when traditional skills can be outsourced or automated, creative skills remain highly sought after and highly valuable.

“The myth of innovation is that it starts with entrepreneurs, but it really starts with people having fun. The Wright brothers weren’t trying to build an airline, they were saying, ‘Holy shit, do you think we could fly?’ The first kids who made snowboards, they just glued skis together and said, ‘Let’s try this!’ With the web, none of us thought there was money in it. People said, ‘This document came from halfway around the world. How awesome is that!'”
So what if we all stopped trying to “innovate”–and started trying to have fun and really do something new?      Tim O’Reilly

Adults are drawn to the playful as well (below sold out)