The appropriate use of these three words, or more accurately word families, can shockingly change the emotional air quality in all of your relationships, and quickly.  Why and how?  Because every human interaction can be rated on a scale from emotionally nourishing to emotionally toxic.  Poorly utilized, these three word families are emotionally toxic to others, yourself, or both.  Speaking with compassion is nourishing, and combining that with power and conviction yields compassionate ACTION.  Who doesn’t need more of that?

All “why” questions can be rephrased, usually with better results.  “Help me understand . . .”   “Tell me more about . . . .”  Still, we need to watch out for the intent of “why!”  “What were you thinking?!”  has the same effect as “why?”.  Similarly, “How could you do that?” or “When did that crazy thought enter your mind?” focus on how the person is wrong/stupid/bad, and the speaker is just and right.  Consequently, any response must delve into the past to seek justification or incrimination.

Would, Could, Wish, Ought, Supposed To, Want, Gotta, Probably, and Need often fit here as well.  These words can create a judgment, and rarely are they followed with intention/action.  More often, they are spoken with regret, guilt, obligation, shame, or distain.  If the phrase appears to pointing a finger at others or yourself, then it is a negative judgment.

Note that it is impossible to experience anger without the word or sentiment of “should.”  This concept really threw me for a loop, but I have yet to think of an exception.  Anger always involves a “should.”  “They/he/she/I should(n’t) do it this way!”  Let me know if you can think of one – I’m still racking my brain!

Opinions are a special case of “should.”  In politics or with advice, the sentiment of “should” can be present, even without the word.  Rather than expressing one’s thoughts on a matter reasonably and with curiosity about the other position, the speaker believes the other person “should” take on their point of view.  The closer the position is tied to the ego, the more “should” sentiment is attached to it.

In group settings, an individual will often offer something to the group using a “should” sentiment.  “Hey, we should think about this some more.”  “We could look at some other options as well.”  “I think we’re supposed to be doing this instead.”  All of these are a form of soft telling.  Make a personal and specific request instead.  “I like the idea of recycling and composting in the dining area; how does everyone else feel about that?”  “I find announcements work better when they are all done together; what does the group think about that approach?”  You will find that “should,” “could,” etc. statements can be glossed over, and often are, but a personal request will certainly be addressed.  Speak with conviction (Taylor Mali video).

Try removing the “should family” from your vocabulary and see how your intentions and actions change.  Make a specific, positive choice of your own free will that includes intentions/plans with traction.

Sneaking should back into your vocabulary:  Using should as a guess at the future, without referencing people, is innocuous, but substitute “expect” for should to train your mind initially.  If you can substitute “shall” for should, it is likely a genuine question without judgment or negativity.  “Need” instead of should can be used in instructional situations without judgment or negativity, but otherwise it likely carries a negative judgment.  Rarely, “oops” can be substituted for should without implying judgment, but it is a razor’s line to walk.

There are three common uses of a yes or no question, with the third being alienating/degrading, and the first two being largely healthy uses.  The intent of the speaker is key, as is how that intent lands/feels.  Generally, more expansive questions, requiring more than a simple yes or no, feel better and are more empowering.

BONUS – examples of implied “should” statements

The energy in words that moves people and things

Fascinating: energy changes form, but doesn’t die/end. It has many forms, such as light, heat, motion, electrical, gravitational, as well as sound and breath. Hold your hand in front of mouth and speak: Peter Piper Picked a Peck of Pickled Peppers. You felt, particularly, the p’s. Your breath can also blow up a balloon, storing energy, and then pop it (BOOM!). And, your breath can put out a fire (candle) or start one (blowing on embers). Your breath and sounds contain energy, and when they leave your body, they have an effect on the world.

Similarly, almost everything important you do in this world will require and affect other people. Really? Yes. Think about it. The strings of words you put together determine most of your experience. You can physically build something, but if you want people to help you, you’ll need words. If you want to build relationships, coalitions, movements, and understanding, you’re going to need words. On a one-on-one level, dialogue is how mind and hearts are changed. Think about leaving an impact, a legacy, and think about doing so without using words. Your words are your PRIMARY tool for action and change on Earth. With that understanding, and what we’re up to at Camp Augusta, we implore and require you to be purposeful and positively powerful with your words. 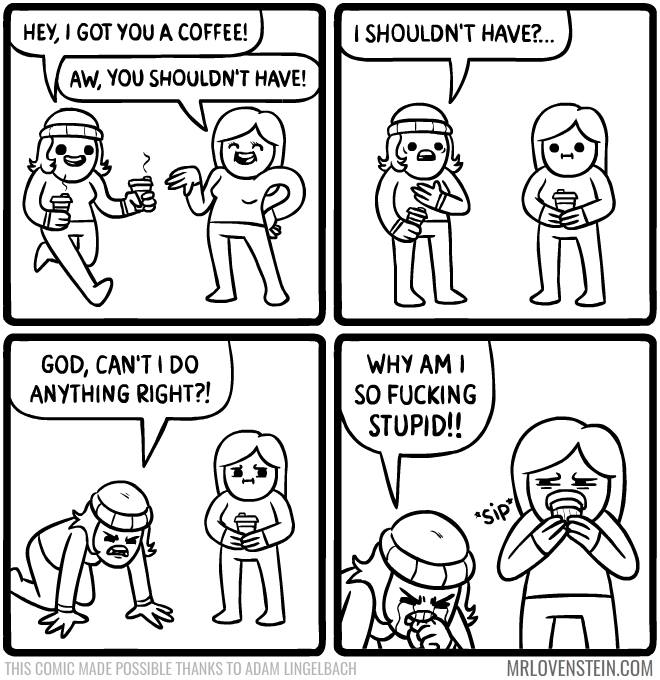 In my experience, people go through five stages in the implementation of these concepts.  It is important to understand this progression, as otherwise folks seem to get stuck at the stage they are at, and believe that is the end of the road.  Stages 2 and 4 are particularly sticky, yet time with a mentor and practice always yields progress.

As you progress through the stages, be patient with yourself.  Even folks at Level 5 make mistakes and struggle, especially in difficult circumstances with oneself or others.  Change the application of these word families and you’ll change the emotional air for the better.  Your relationships will be richer and more satisfying.  Your power to move people willingly and positively will increase.

Getting lost on the path

Are we (words) breaking up?

Turning around or staying put

Light karma, bring it on!